skip to main | skip to sidebar

Whoa, I Actually Painted Something (other than my bathroom) 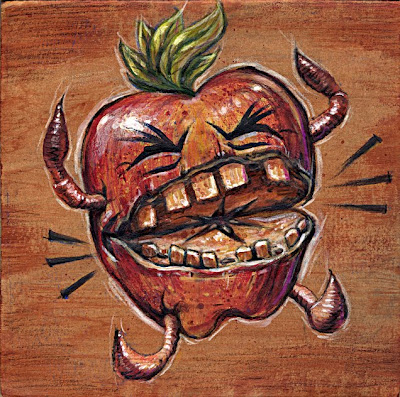 It's been over six months since my last confession. In that time, I left my job of over 8 years at Little Caesars to become Creative Director for Olympia Entertainment/Red Wings, which has been a fun, wild and wooly ride...but hasn't left a lot of time to do personal work. So I'm extra super-duper excited to present the official gang sign for "The Bad Apples," rival gang to "The Rotten Bananas."

I did the Rotten Bananas sign for my kids' treehouse nearly two years ago. 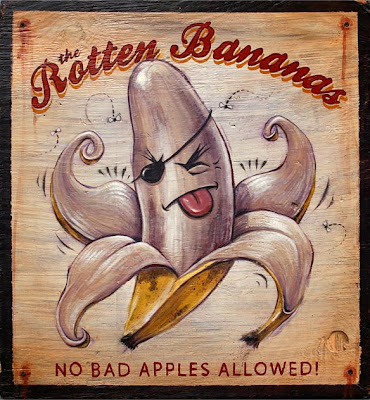 Shortly afterward, I had the idea for what their arch enemies would look like, and did a quick thumbnail, which has been floating around my studio since.

The impetus to paint it finally came when Phil Hilliker asked me to participate in "MiniGrand- A Giant Show of Tiny Proportions" at Lullubell Toy Bodega, opening this Saturday in Tucson. The theme of the show is small pieces (7" or smaller), and since the Rotten Bananas sign is one of the biggest paintings I've done at over 26," it was fun to try to give them a similar look and feel when they were done at such different sizes ("The Bad Apples" measured in at under five inches--no size jokes, please). The piece is acrylic and Prismacolor on the backing cardboard from a cheap, plastic frame (sorry Phil).

The show features great artists like Adam Rex (author and artist of great books like Frankenstein Makes a Sandwich), Brandon Garrison and Brian Stuhr. If you're in the Tucson area, I invite you to check it out.

I'm going back into my cave...See you in another six months!
Posted by Bryan Durren at 11:40 AM No comments: 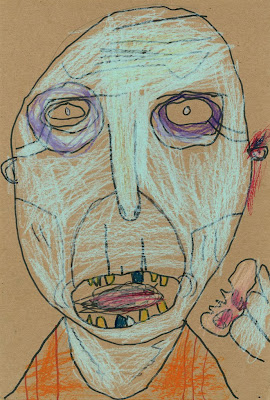 Tonight is the opening reception for "Monster," at work•detroit, an exhibition space for University of Michigan School of Art & Design. The show asked creators to answer the question, "What is a Monster?" and features the work of talented grown-up artists like Jesse Kassel and Zach Hewitt, as well as from the imaginative minds of kids like my son Heath (age 8), Finn Schudlich and Ethan Swan. Should be a great show. Thanks to Stephen Schudlich and Daniel Swan for encouraging the viewpoint of the kids, which is refreshing and fun.

Comics Can Save The World! 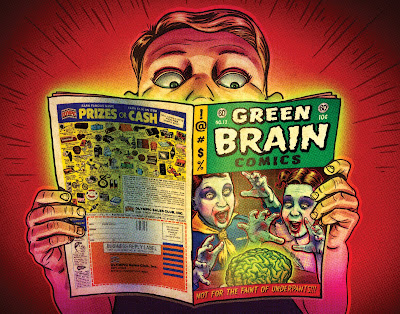 Saturday, May 1st marks my favorite holiday of the year, Free Comic Book Day! I encourage y'all to go to Green Brain Comics to get your three free comic books. While you're there, you can check out my picture which is up for auction benefitting the Kids Read Comics Convention.
What is Free Comic Book Day, or FCBD as we call it in geekspeak? To raise awareness of comics, major and independent publishers produce comic books to be given away on that day. The catch? You have to put down your Wiimote, get off the couch and head into a local comic book shop. If you go to Green Brain, they even have a slew of great artists signing their work, including my pal, Chris Houghton.
In the Headspace Gallery at Green Brain, you have the Kids Read Comics benefit auction, featuring lots of great artists including Heather Hansma, Chris Houghton and yours truly. You can place a bid on my picture, but don't forget yer wallet, 'cuz it's already up to $300. Wowzers! The Kids Read Comics Convention itself is June 12 & 13, 2010 at the Henry Ford Centennial Library in Dearborn.
Now, how can comics save the world? Well, if we can get more kids into reading comics, we just might be able to get them interested in reading. If we can get them into reading as opposed to only subsisting on video games, we might end up with a few more smarties and a few less slack-jawed dullards. And if we get a few more smarties, who knows what they might be able to do: Create world peace? Cure cancer? Carry on an interesting conversation? The sky's the limit!
Posted by Bryan Durren at 8:09 PM 2 comments:

Milton May Refuses To Take Off His Sunglasses Until The Hulkster Regains The Title! 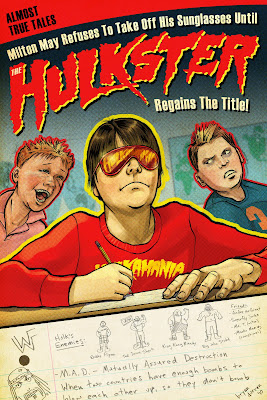 I created "Milton May..." for the "Almost True" show at Lulubell Toy Bodega in Tucson, Arizona, opening April 10th. It was a true labor of love, based on an actual dude I knew in middle school in the 80s, who really wore his sunglasses all the time in school for a week or two until Hulk Hogan won his title back.
Back then, anyone who did anything slightly different from the norm would be the source of immediate scorn and ridicule from a bunch nasty little middle schoolers. So it was outrageous for someone to take a stand like this, especially for something so ridiculous. But Milton defiantly lived in his own world and didn't give a rat's ass what people thought of him, so I have total respect for him doing it.
The other two kids in the picture are a composite of several of the douchey Berkshire Middle School students that I hated back then, and still hate to this day. On the left, you have the squeaky-voiced, smart-assed preppy kid; sort of a Corey Haim type (RIP); and on the right, the fat, moronic, jockish bully. To remain true to the time period, both have a freshly appied Sun-IN™ treatment to their hair.
Like Milton May, I was a bit of a geek back then also, (who am I kidding?--a big geek), who also liked pro wrestling, but since I weak-mindedly yearned for the popular kids' acceptance, I never would've dreamed of outing my geekiness the way Milton did. Just drawing the two little f#ckers behind Milton brought back my resentment. Another sure sign I need counseling.
As far as the "Almost True" part, I asked several friends about the Sunglasses incident, and everyone's memory was a little different. Some said it was definitely Hulk Hogan he was supporting, but one said that he hated Hulk Hogan and only liked the bad guys, which messes everything up. Not to mention, I researched Hulk Hogan's title reigns and had trouble finding when he lost the belt while I was in middle school, but I wasn't going to let a little factual inaccuracy stop me.
The bottom line is Milton May was a maverick, and worthy of such a tribute. So here's to you Milton May, and to all the little Hulkamaniacs everywhere!
PS: Milton May wasn't his real name, so if you know it, please don't post it here. For all I know he could be a lawyer, and with my luck, he would sue me for slander.
Posted by Bryan Durren at 5:11 PM 3 comments:

Come see me at the Covered! show tonight 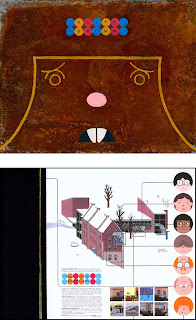 Tonight kicks off the Covered! exhibit at Headspace Gallery inside Green Brain Comics. Come check it out if you can. The show features a ton of great artists including Ryan Lee, Chris Houghton and Heather Hansma. If you're not familiar with the Covered concept, it is almost like a band doing a cover song: you pick an existing comic book cover and put your own spin on it. The show is based on the great Covered blog.
For my piece, I decided to take on the genius that is Chris Ware, and his Acme Novelty Library #16, Rusty Brown. I knew I couldn't compete with Ware's brilliance, so my goal was to create something completely different, that hopefully he wouldn't hate. Since I'm johnny literal, I painted it on a piece of Rusty Brown steel.
Here's a small pic of it with the Chris Ware cover below it. Please come check the show out! If you can't make it tonight, the art will be on display until March 6.
Posted by Bryan Durren at 10:13 AM 3 comments:

A Letter of Explanation

Why, why, why does the world need another artist's blog? Well, it clearly doesn't, but I've been suffering from a serious case of blog envy, so I decided to step into the 90s and fire one up.
If you know me, you know I love naming things, so my apologies that Blogimus Maximus was the best I could come up with. I thought I had a truly great one in the form of Blogjammin', but I googled it and a bunch of people were already geniuses first.
Today was a big day. It was the start of a new semester at CCS, I got a promotion at Little Caesars, I launched my new site (http://www.bryandurren.com) as well as this blog. To top it tomorrow, I'm going to enroll in law AND medical school, become a snake handler, have about five more kids and start smoking (again).
In all seriousness, I will be posting my latest artwork and news here, as well as golden nuggets of wisdom for my students and the general populous, so check back often. Seacrest out!
Posted by Bryan Durren at 9:59 AM 6 comments: